My recent trip to the Dr. Samuel A. Mudd House has reawakened my fascination with the Lincoln assassination.  I have been intrigued by the assassination and conspiracy since I was in elementary school, but while I have read numerous books on the topic and have watched all of the documentaries made since the 1990s, I realized this week that I had not given much thought to the play that Lincoln was watching when he was shot.

Our American Cousin was a popular farce written by Tom Taylor and had premiered at Laura Keene's New York theater in 1858.  The play proved to be an immediate success.

The play is a farce and the comedy in the play revolves around puns, clever word play, and physical comedy.  President Abraham Lincoln was an avid theatergoer and was very discerning in his choice of plays.  His love of Shakespeare is legendary.  On face value it is hard to understand why Lincoln chose to attend Ford Theatre's production of Our American Cousin.  A deeper look at the play itself reveals the play's appeal to Lincoln. 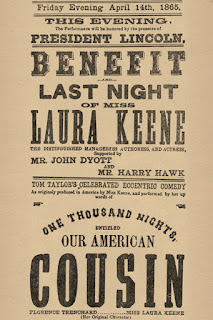 The plot revolves around the financial woes of the Trenchard family.  The Trenchard's are an aristocratic family on the verge of losing their ancestral estate in Hampshire, England.  The estate's manager, Mr. Coyle, is stealing from the Sir Edward Trenchard and has designs on marrying the lovely Florence Trenchard.  Florence has no interest in Coyle, she is in love with Harry Vernon, but they cannot marry until Vernon receives a commission in the Royal Navy.  In an attempt to get her lover a commission Florence has invited Lord Dundreary to Trenchard Manor, but Lord Dundreary is a vain, dimwitted fop.   To make matters worse, the oldest son while on a shooting trip to Vermont discovered that the family estate was left to their American cousin Asa Trenchard.  The arrival of Asa sends the house into an uproar as American and British culture clash.  Asa Trenchard is a well meaning but vulgar and his American sayings provide confusion and misunderstanding.  While bemused by her cousin, Florence develops a genuine fondness for her cousin. Asa frequently targets the clueless Lord Dundreary with his verbal salvos.  Despite Asa's lack of social graces his wealth makes him the target of the fortune hunting Mrs. Mountchessington who throws her daughter Augusta in his path.  Asa quickly uncovers Mr. Coyle's nefarious plot and with the assistance of the houses servants and Coyle's disgruntled assistant Abel Murcott sets out to expose the villain.  By the end of the play, everything has been resolved with a happy ending for all the key players.

President Lincoln loved the play because he could recognize himself in the title character, in his youth Lincoln was viewed as boorish and uncouth by many of his contemporaries.  In the play, Asa falls in love with the heiress Mary Trenchard and Asa rises above his humble beginnings and becomes a member of the British aristocracy.  In real life, Abraham Lincoln rose from his humble origins and married Mary Todd and became president of the United States.

Lincoln also loved clever word play and puns and the dialogue of Our American Cousin is full of this type of humor.  Below is a following example of the dialogue found in the play:

"Asa [Goes hastily up to table] Wal, I don't want to out too plain, but this is an awful mean set out for a big house like this.
Florence Why, what's wrong, sir?
Asa Why, there's no mush!
Dundreary No mush?
Asa Nary slapjack
Dun Why, does he want Mary to slap Jack?
Asa No pork and beans!
Dun Pork's been here, but he's left.
Asa And where on airth's the clam chowder?
Dun Where is clam chowder?  He's never here when he's wanted." (Act 1, Scene 1)

Also the actors preforming Our American Cousin would have also been a draw.  Laura Keene was reprising her role of Florence Trenchard a role that had brought commercial and professional success since her debuted the role in 1858.  The April 14, 1865 performance was a benefit for Laura Keene and the actress received a portion of the box office revenue.  Performing alongside Keene was Harry Hawk a popular comedian who was playing Asa Trenchard. 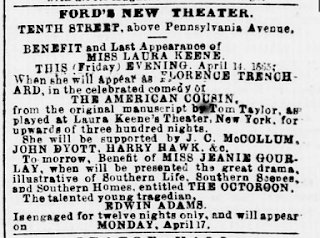 Advertisement for Our American Cousin in the April 14, 1865 edition of the Washington Evening Star.  (Image courtesy of Wikipedia).

After a long and bloody Civil War, the war was finally drawing to a close and after a week of celebrations President Lincoln was looking for an evening of diverting entertainment.  From the accounts of witnesses at Ford's Theatre, Lincoln appeared to be enjoying himself watching the play.  This compounds the tragedy of the assassination, in a moment of joy Lincoln's life was snatched away in an instant.

Applewood Books published a good edition of Our American Cousin.


Posted by Michelle Hamilton at 8:31 AM