A Conversation with Clara Templeton (and Leanna Renee Hieber)

Long time readers of this blog know that I love the work of my friend Leanna Renee Hieber. In celebration of the release of her novel THE ETERNA FILES in mass market paperback from Tor Books on February 2, 2016, Leanna is answering some of my most pressing questions that I had for my favorite character Clara Templeton. And best of all, below is a link to enter a drawing for a signed copy of THE ETERNA FILES. 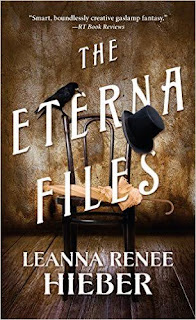 About Clara Templeton: Clara is a very strong-willed, emotionally complex young woman who is orphaned in her pre-teen years and taken on, per the family’s wishes, by their friend, Congressman Rupert Bishop, who tends Clara dutifully and honorably and helps bring out her Spiritualist and Sensitive talents. The Eterna commission’s mission to search for a “cure for death” for elected officials during their time in office is Clara’s idea, borne of a twelve year old mind and a conversation with the grieving Mrs. Lincoln after the assassination of her husband. At the time of the story, Clara is now twenty-nine years old, just as strong-willed as ever and far more emotionally complex and it is a great worry to her that The Eterna commission has borne no results despite many forays into psychic and paranormal research, though the commission has taken a grave toll on those she loves and cares for. “My dear Miss Hamilton, I thank you for your inquiries about me and my association with Mrs. Lincoln. Let me address them herein: It is one of my greatest regrets that I did not see Mrs. Lincoln again after that fateful night when called to her side after the death of her husband, ostensibly to channel the spirit of the great Mister Lincoln, a demand Rupert and I declined to fulfill. Because I had left her with nothing but the first burgeoning hopes of what the Eterna Commission might reveal, I didn’t feel I could go back to her until I had either answers for her regarding the commission, or a direct message from any of her deceased loved ones that they demand she hear. I confess, Mister Lincoln did murmur to me, as I left the White House that day in my youth in 1865, said softly in that unmistakable reedy voice of his, that he would be there with Mary as best he could be, to soothe her, but that he didn’t know if alerting her to his presence was a help or a hurt, so I’d best continue on but go with his blessings and assurances. I told Rupert of course, asked if we should go back, to say what had been said, he shook his head and to simply do what the president bid; go in his good grace. Rupert told me it was Mary’s lot in this life to be troubled; that there was so much he couldn’t save her from, due to her own mind’s minefields, and considering the presences of Spiritualists often made her extremely excitable, he too regretted that we did not keep up with her as perhaps we should have. It is hard to know, as a Sensitive, where you are best suited, served, wanted, or needed. What Rupert did do, however, was to corroborate with Mrs. --- to get her out of the mental ward her son had confined her to. She was troubled- who wouldn’t be considering all that had befallen her, the sheer trauma of it all- and she deserved freedom, in this, I am proud Rupert helped intervene. If there is something further Mary wishes to say to us, I hope she will come forward and do so in any séance held or at any time, bidden or uninvited. Until that time, it is my profound and sincere hope that she is resting in much deserved peace.” (End of Clara’s narrative) My dear Michelle and esteemed readers, thanks so much for this chance to connect with you and to discuss my beloved heroine Clara and her world! Please take a moment to enter this giveaway, raffling off 3 signed mass market copies of THE ETERNA FILES and all including a signed book plate for the sequel, ETERNA & OMEGA, releasing this August from Tor Books! Cheers, thanks again and happy haunting! a Rafflecopter giveaway Leanna Renee Hieber http://leannareneehieber.com http://twitter.com/leannarenee http://facebook.com/lrhieber
Posted by Michelle Hamilton at 7:14 PM