Last Saturday, I visited the Edgar Allan Poe Museum in Richmond, Virginia to celebrate the master of macabre 207th birthday.  This was my first trip to the Poe Museum and it is a hidden gem in the midst of Richmond's Civil War history. 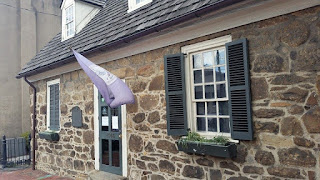 One of America's finest writers, Poe spent thirteen years in Richmond.  Born in Boston, Massachusetts on January 19, 1809 to the English born actress Elizabeth Arnold Hopkins Poe and actor David Poe, Jr, Edgar Poe was his parents second child.  Young Edgar spent his early years traveling his parents from one theater to another, even appearing on stage as a toddler playing Cupid in a production of Cinderella.  Edgar's early year's where difficult, his father abandoned his family and his mother died destitute in a Richmond boarding house of tuberculosis in 1811 when Edgar was just three year's old.  Eliza Poe was a popular actress who enthralled Richmond society with her beauty.  When it became apparent that Eliza was dying, society matrons rushed to her bedside to care for her and her young children.  After Eliza's death, Frances Allan decided to foster three-year-old Edgar.  A day after Eliza's death, Edgar was christened Edgar Allan Poe.  Frances Allan and her wealthy merchant husband John Allan became Poe's foster parents.  The Allan's gave Edgar the wealth and education that he would never have received as the son of traveling actors.  For five years, Edgar lived in England with his foster parents.

While Frances showered Edgar with love and affection, Edgar's relationship with John Allan proved to be difficult and strained.  John Allan wanted Edgar to follow in his footsteps as a respectable merchant.  When it became clear that Edgar had the spirit of an romantic poet, the division between the two deepened.  Their relationship was furthered strained by Edgar's abandonment of his studies at the University of Virginia due to Allan's failure to send the scholar the needed funds.  When Edgar Allan Poe returned to Richmond, he discovered that his fiancee Elmira Royster had become engaged to another man.  Elmira's father disapproved of the relationship and intercepted Poe's letters.  Feeling that he had nothing left for him in Richmond, Poe ran away and joined the Army under a fake name.  Dissatisfied with Army life, Poe got an appointment to West Point due to John Allan's political connections.  Once again, John Allan refused to pay for Poe's tuition.  Unable to pay, Poe misbehaved and was kicked out of West Point.  By this time, Frances Allan had died and Poe cut off ties with his foster father.

Away from his foster father, Poe began his literary career moving around to Baltimore and Philadelphia.  Poe returned to Richmond in 1835 where he served as editor to the Southern Literary Messenger.  While living in Richmond, Poe married his thirteen-year-old cousin Virginia Clem.  The couple moved to New York in 1837.  Poe would not return to Richmond until 1848 following the death of Virginia from tuberculosis.  For the final two years of his life, Poe was a frequent visitor to Richmond reestablishing ties with childhood friends.  After years of struggling with alcohol, Poe was determined to turn his life around and even became engaged again to Elmira Royster Shelton.  But much like the stories Poe penned, tragedy was lurking behind the corner.  Edgar Allan Poe departed from Richmond for the last time on September 27, 1849 for a short business trip to Philadelphia.  Five days later, Poe was found incoherent in a Baltimore tavern wearing clothes that did not belong to him.  Rushed to Washington College Hospital, Poe lingered for four days, dying on October 7, 1849--ten days before he was to be married.

For decades, Richmond struggled on how to honor Poe's legacy.  Finally in the twentieth-century, the Poe Shrine was established in the Ege House in Richmond's Shockoe Bottom.  The Ege House was built in the 1750's and is the oldest surviving structure in Richmond.  Sadly, the majority of buildings associated with Poe have been demolished.  But the Ege House did have a connection to Poe.  In 1824, the Marquis de Lafayette visited Richmond during his American tour.  While in Richmond, the Marquis visited the Ege House to pay his respect's to the family.  In 1781, Mrs. Ege had witnessed the British invasion of Richmond from her house.  Edgar Allan Poe was part of the ceremony paying respect to the Marquis and stood outside the Ege House as part of the Junior Morgan Rifles.

The Edgar Allan Poe Museum is worth a visit.  In five buildings, including the 1750's Ege House, is a repository of Poe items.  Books, manuscripts, paintings, and artifacts are tastefully assembled to tell the story of Poe's life and legacy.  One of the museums prized treasures is the Cornwall daguerreotype of Poe--the most iconic image of Edgar Allan Poe ever taken. 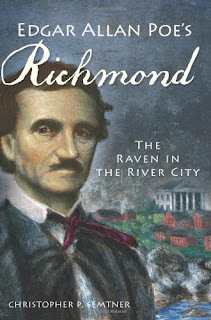 Edgar Allan Poe's Petersburg: The Untold Story of the Raven in the Cockade City by Jeffery Abugel 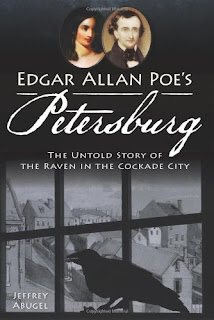 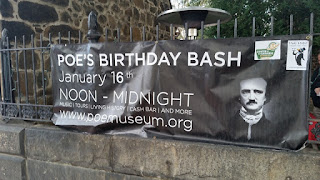 Posted by Michelle Hamilton at 5:08 PM