Museum of the Confederacy Lecture and Flag Unveiling

Today in Virginia is a state holiday, Lee Jackson Day, which celebrates the birthdays of  Gen. Robert E. Lee who was born on January 19, 1807, and Gen. Thomas "Stonewall" Jackson who was born on January 21, 1824.  In celebration of my first Lee Jackson Day as a Virginian I spent the afternoon at the Museum of the Confederacy in Richmond where I attended a wonderful lecture and the unveiling of the newly conserved headquarters flag of Gen. Earl Van Dorn sewn by Constance Cary. 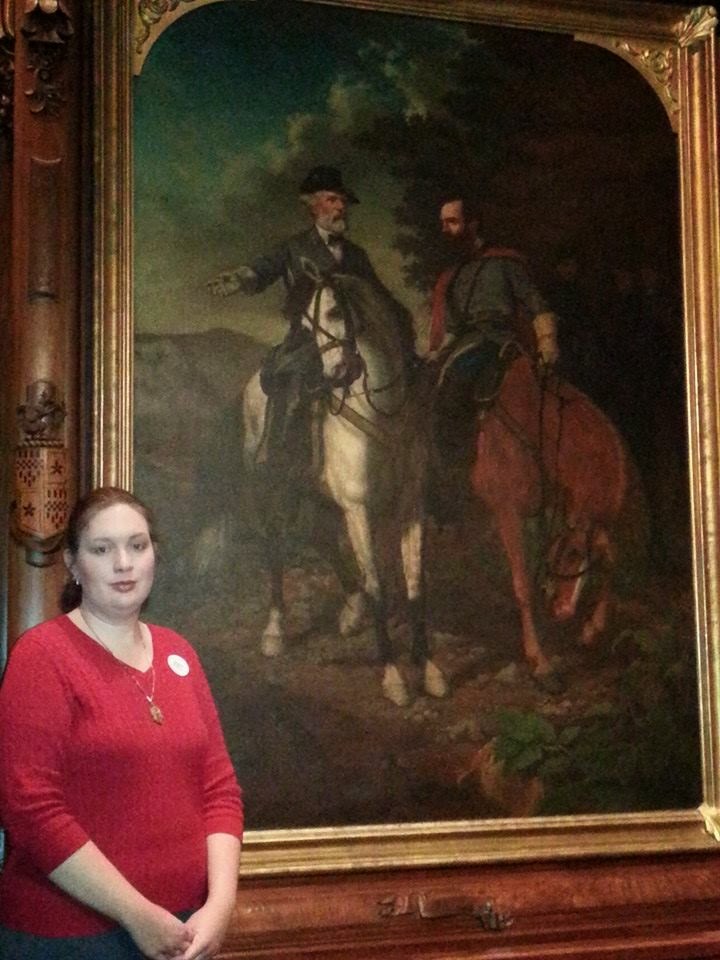 "The Heroes of Chancerllorsville" by Everett E.D. Julio, 1869.  Photograph taken by Lynn Hamilton.  For the day I was decked out in Confederate grey and red.

Today's lecture, "One Bright Moment: The Wedding of John Pegram and Hetty Cary" was presented by Kelly Hancock the MoC's Interpretation and Programs Manager.  The lecture was part of the MoC's Brown Bag Lunch Talk, a series of lectures that focus of Confederate history as part of the Civil War Sesquicentennial and are free with admission to the museum.

The wedding of Hetty Cary and Gen. John Pegram was the last society wedding that took place in the Confederate capital.  Married on January 19, 1865 at St. Paul's Church by Rev. Charles Minnigerode, the ceremony and wedding reception was the talk of the town and the guest list included a who's who of the Confederate government, military and Richmond high society.  Despite all the glamour of the day, the wedding was preceded by several ill omens.

The couple were young, beautiful, and glamours.  Hetty Cary was the belle of Richmond and was called the "most beautiful woman of the South."  Born outside of Baltimore, Maryland on May 15, 1836, Hetty was pretty and vivacious.  Devoted to the Southern cause, Hetty and her sister Jennie composed "Maryland, My Maryland."  The sisters were not shy on displaying their feelings, the girls could be heard loudly signing pro-Southern songs from their house and once when a regiment of Union soldiers passed her house Hetty waved a smuggled Confederate flag out the window.  This behavior could not continue in Baltimore and Hetty and Jennie Cary had to flee to Richmond.  Settled in Richmond, Hetty and Jennie were re-united with their cousin Constance Cary and the three girls became known as the "Cary Invincibles."  The Cary Invincibles helped sew the first Confederate Battle flags, known as the Southern Cross. 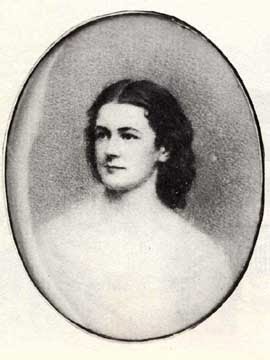 While in Richmond, Hetty Carry was introduced to Gen. John Pegram.  John Pegram was born in Petersburg, VA on January 24, 1832.  John moved with his family to Richmond as a boy.  Sadly, his father died in a steamboat explosion.  To support her children, John's mother ran a girls school, but John was fortunate to receive an appointment to the United States Military Academy at West Point.  John graduated as part of the Class of 1854 with fellow classmate J.E.B. Stuart.  Following his graduation, John was stationed in California and Kansas, then sent to Italy to observer the Italian Revolution.  Upon his return, John was sent to New Mexico.  While in New Mexico the Civil War began and John Pegram offered his sword to his native Virginia.  The early part of the Civil War was not easy for Gen. John Pegram as he suffered defeat at the Battle of Rich Mountain where he was taken prisoner and sent North.  While imprisoned at Fort McHenry in Baltimore, Maryland, John Pegram met Hetty Cary's parents and obtained a letter of introduction to meet Hetty and Jennie.

After being exchanged, Gen. John Pegram met Hetty Carry and the couple quickly fell in love.  While in the field, John carried a miniature of Hetty.  While part of Lee's army, John was wounded slightly in the leg at the Battle of the Wilderness.  Finally, to the delight of both Hetty and John's family, the couple became engaged during the Christmas season of 1864. 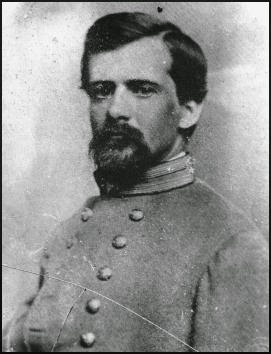 The wedding was quickly arranged, but shortly before the ceremony there were signs that all was not well.  A few days before the wedding Hetty tried on her veil for the first time, after putting it on for her mother, sister Jennie, and cousin Constance to admire, the mirror that Hetty was using fell from the wall breaking in the process.  The Victorians had many superstitions about mirrors having the power to predict events.  In my book "I Would Still Be Drowned in Tears": Spiritualism in Abraham Lincoln's White House, I detail an event in which Abraham Lincoln witnessed a vision in his bedroom mirror.  The broken mirror would not be the only omen.  On the day of the wedding, January 19, 1865, Confederate First Lady Varina Davis sent the Presidential carriage to Hetty's home to convey the bride to St. Paul's Church.  When Hetty entered the carriage and was ready to leave, the horses reared and refused to move.  No coaxing and prodding could convince the horses to move.  Finally Hetty had to ride with John in a borrowed carriage and the couple were late for their own wedding.  The last omen occurred as the bride was walking down the aisle.  Hetty dropped her handkerchief, and will bending down to retrieve the item Hetty ripped her veil.  Though the damage to the veil was unnoticed by the guests who oohed and aahed at the beautiful bride.

Sadly, the omens proved correct.  Three weeks to the day of the wedding, Gen. John Pegram's funeral was held at St. Paul's Church conducted by the Rev. Minnigerode with Hetty wrapped in the black crepe of mourning.  Gen. Pegram was killed at the Battle of Hatcher's Run on February 6, 1865. 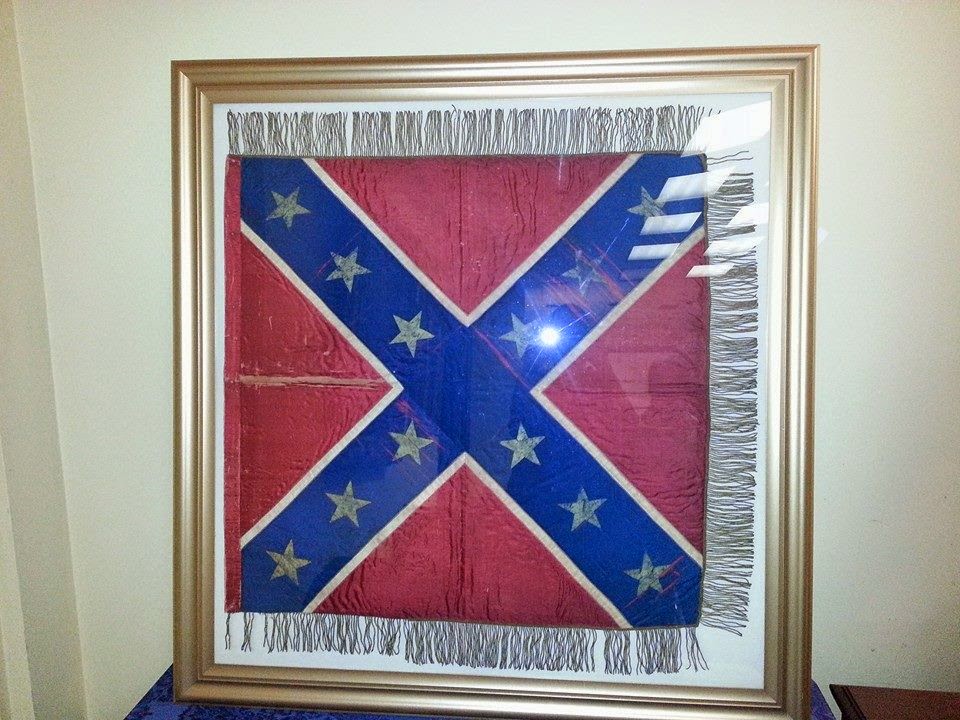 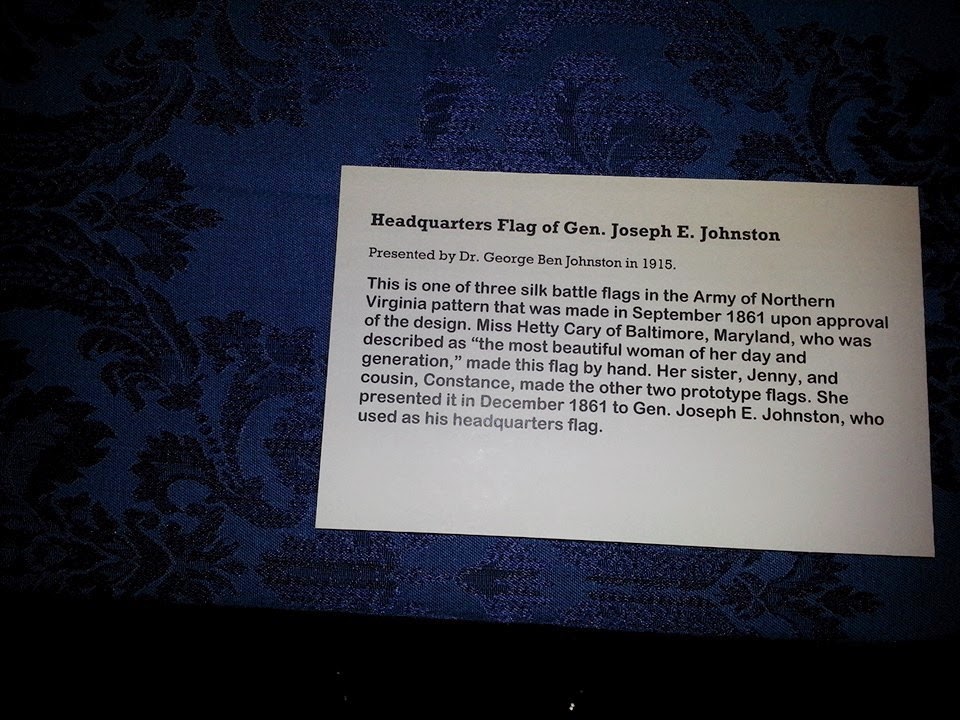 Headquarters flag of Gen. Joseph E. Johnston, sewn by Hetty Carry now in the collection of the Museum of the Confederacy.  Photograph taken by Michelle L. Hamilton.

Following the lecture I attended the unveiling of the newly conserved headquarters flag of Gen. Earl Van Dorn sewn by Constance Cary. 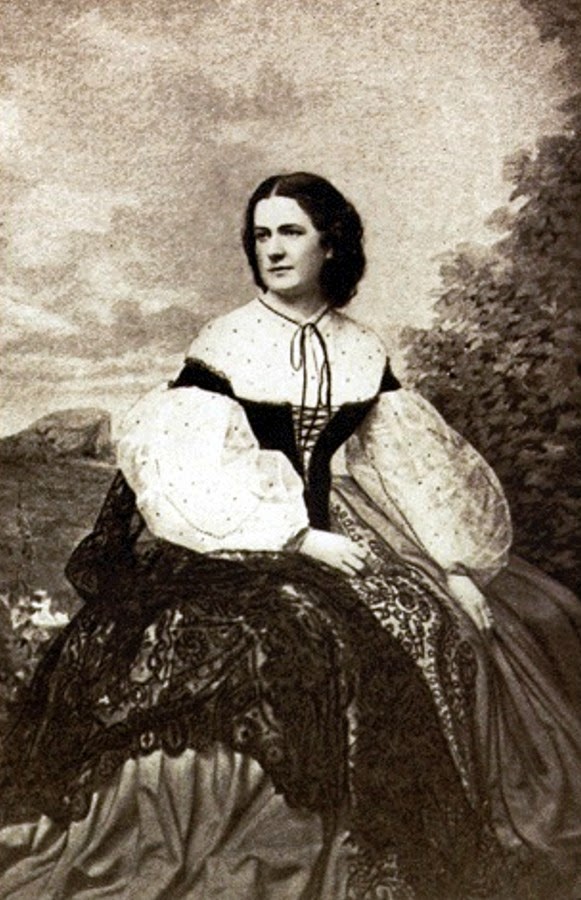 From the official program: "The silk flag to be unveiled was hand sewn by Miss Constance Cary of Alexandria, Virginia.  The flag was one of three prototypes of this design made in September 1861 upon approval of the Army of Northern Virginia flag pattern.  Miss Cary presented it to General Van Dorn in December 1861, who used it until his death in May 1863.

The gentleman who funded the conservation of this flag is the great-great-grandson of the flag's makes Constance Cary (later Harrison) and her husband Burton Harrison.  Harrison lived at the White House of the Confederacy during his service as private secretary to President Jefferson Davis during the American Civil War." 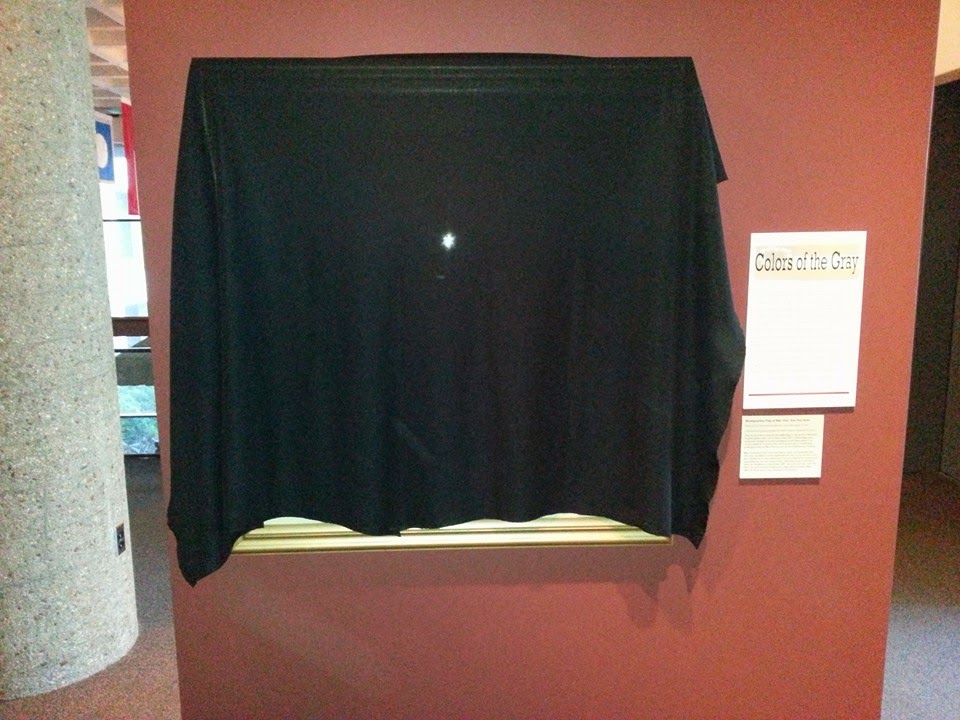 The flag before the unveiling.  Photograph taken by Michelle L. Hamilton. 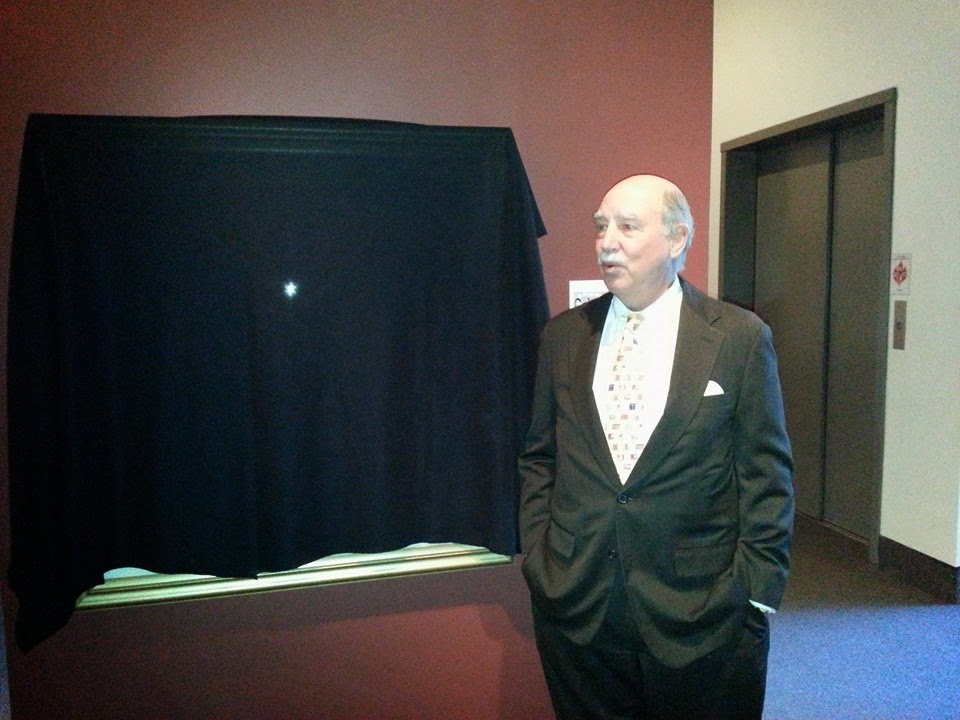 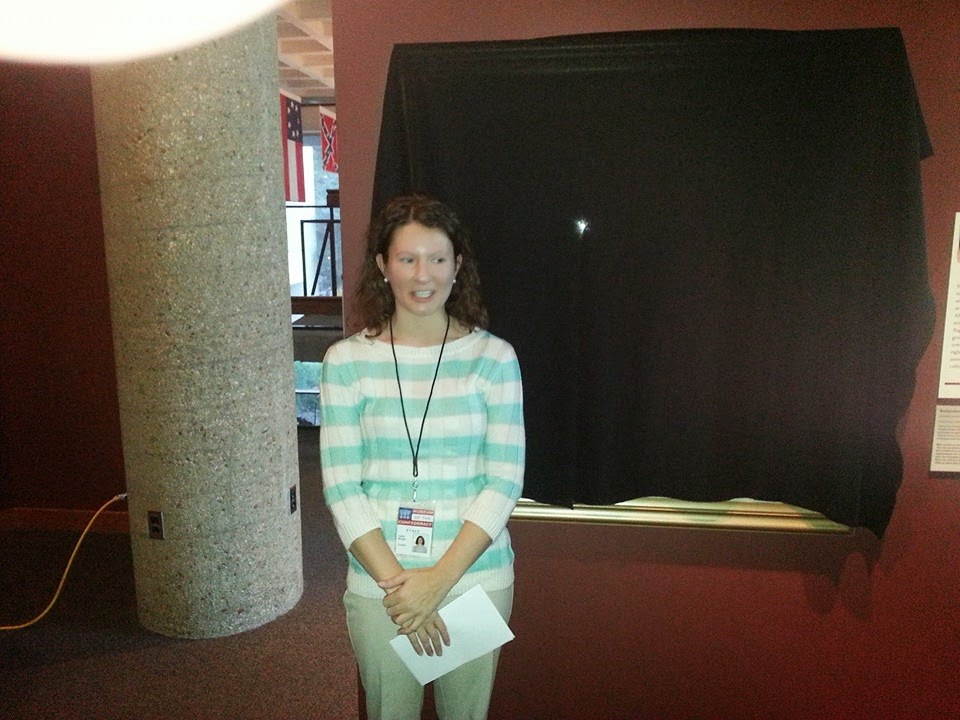 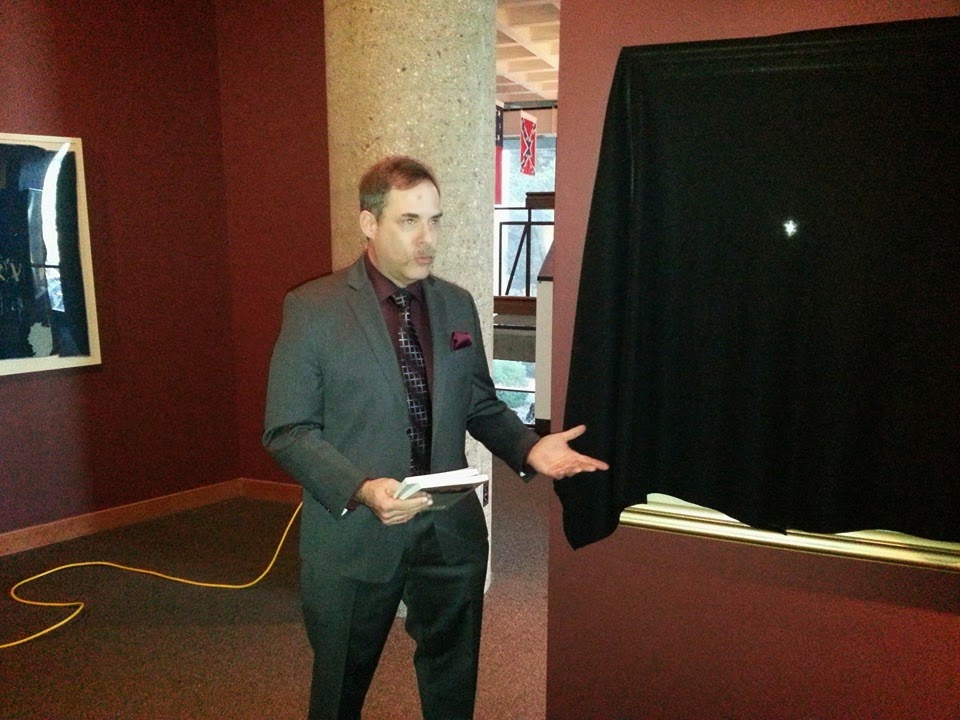 Robert Gilbert, the great-great-grandson of Constance Cary and Burton Harrison who generously funded the restoration of the flag.  He is a passionate advocate of the history of Constance Cary and her cousins and is writing a book about the Cary Invincibles.  Photograph taken by Michelle L. Hamilton 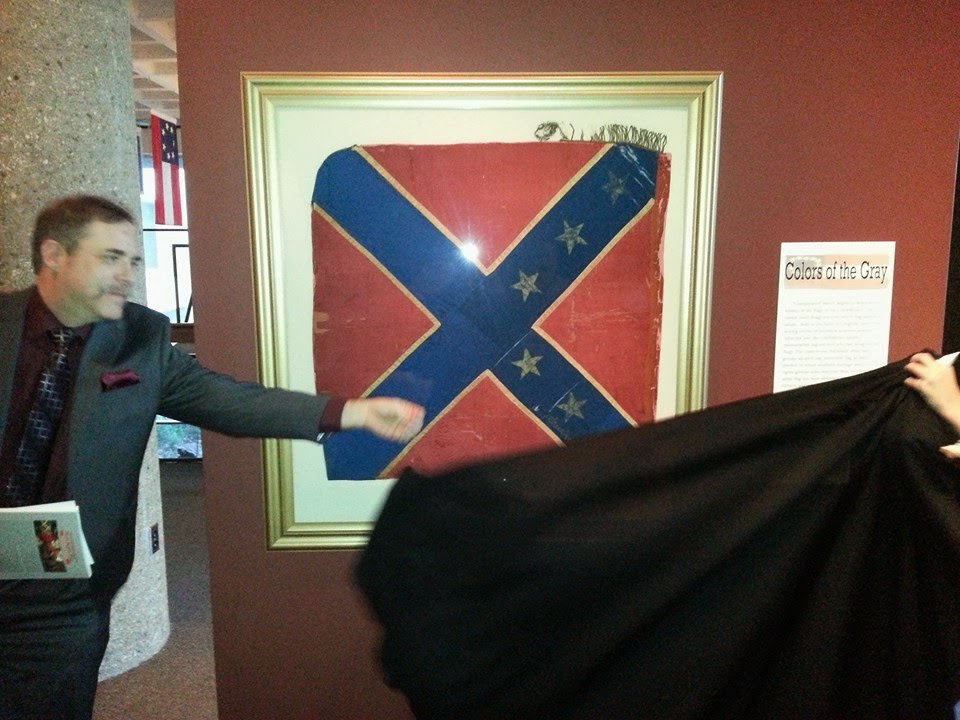 The moment everyone was waiting for.  Photograph taken by Michelle L. Hamilton. 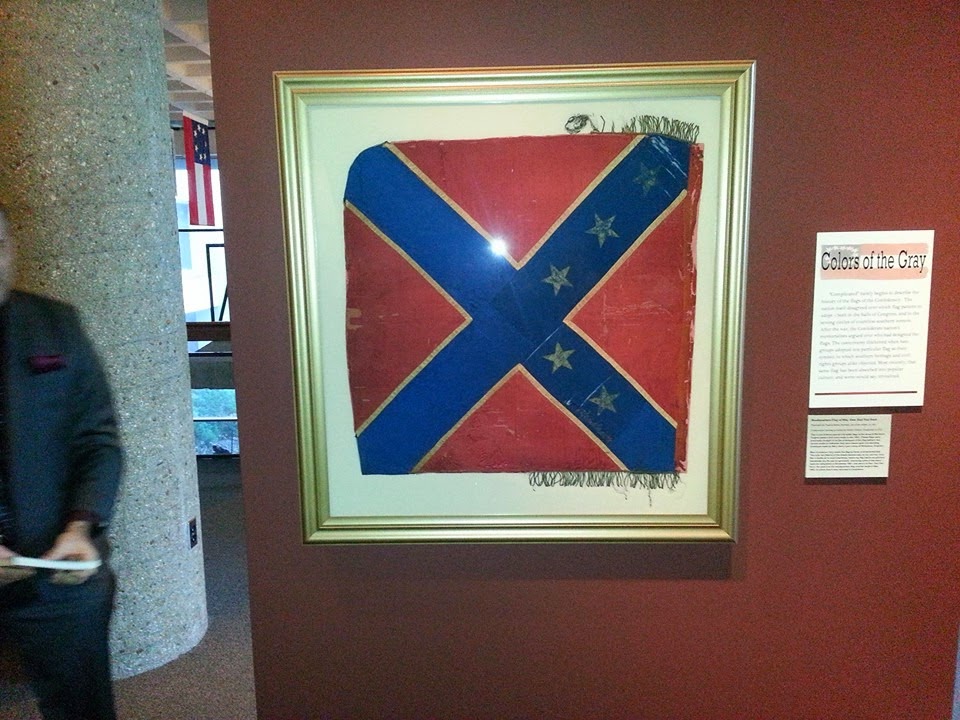 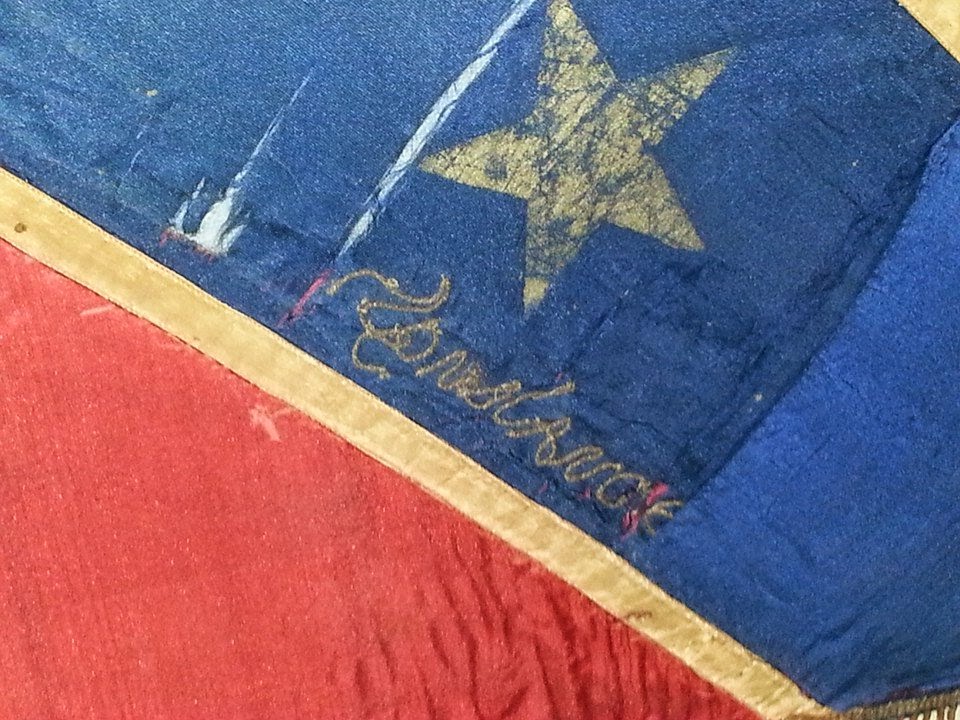 A close up of the flag, Constance inscribed her name onto the flag in gold thread.  Photograph taken by Michelle L. Hamilton. 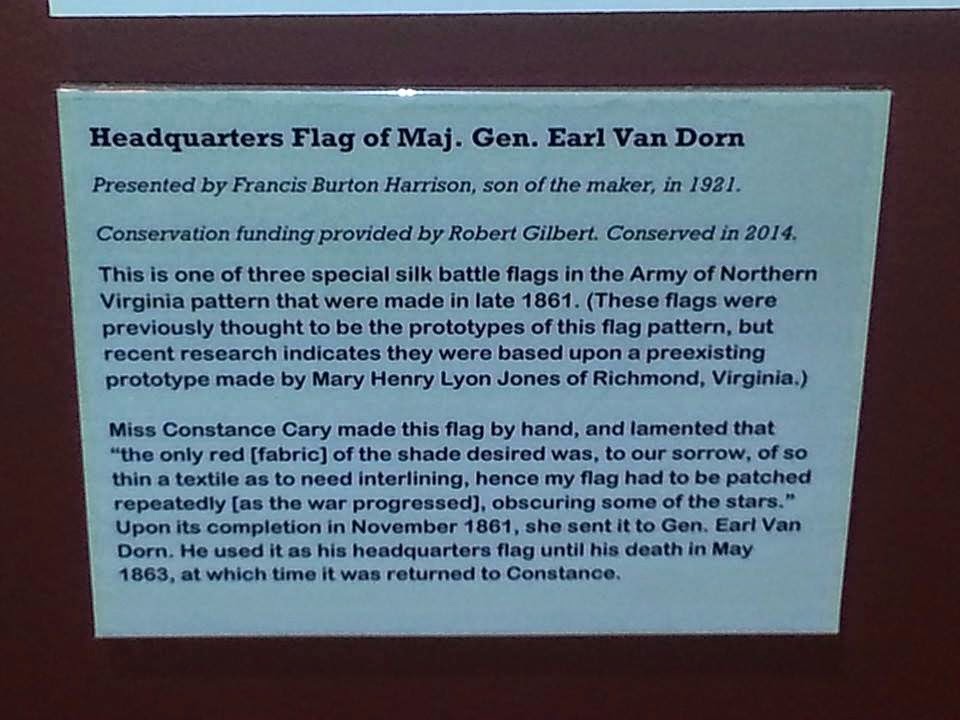 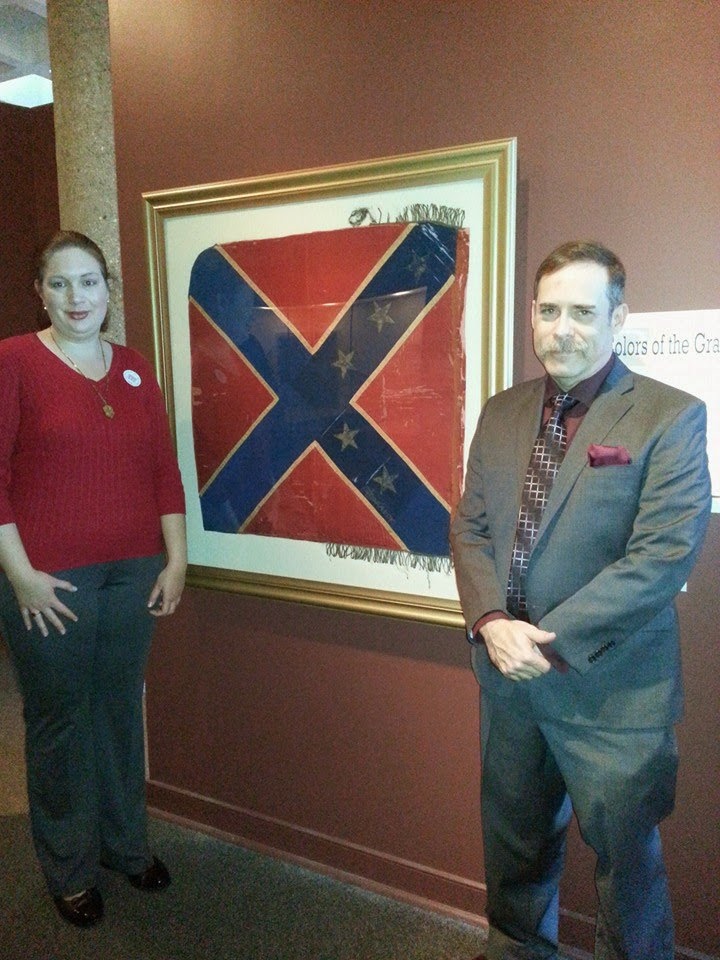 Thank you Mr. Robert Gilbert for helping to preserve this piece of Civil War History, and to Ms. Cathy Wright for caring for this flag and the others in the Museum of the Confederacy collection.

It was a wonderful afternoon, where I learned a lot about a fascinating family of amazing, beautiful women.
Posted by Michelle Hamilton at 4:40 PM