Today Amazon released the trailer for the pilot episode of its new series Point of Honor.  The hour long drama follows the Rhodes family from Virginia who are divided by the Civil War when two brothers-in-law find themselves on opposite sides of the conflict.  When I heard that Amazon had commissioned a drama series set in Virginia during the Civil War, I was hopeful--perhaps with the rise of period dramas we could finally get a decent Civil War series.  Perhaps with shades of Downton Abbey exploring the lives of the white owners and their black slaves during this dramatic period I hoped. 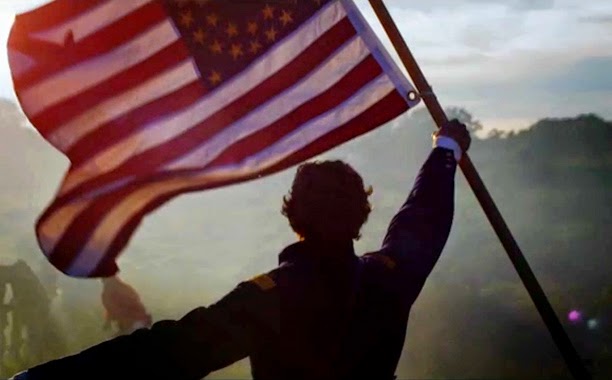 I was hopeful...until I saw the trailer on EW.com.  Where to start?  First, let's talk about the absolutely horrible women's clothing.  Seriously, has American costume designer's ever actually looked at the clothing women wore in the 1860s?  Apparently not as evidenced by the trailer for Point of Honor.  The low cut ball green gown that looks like it came out of a 1980s prom dress catalog with the heaving bosom--the bodice is so low that it would even make Scarlet O'Hara blush.  The costumes for the family's slaves are not any better, in one scene two slave girls look like they just came from an elementary school production of the first Thanksgiving.  The hair for the ladies of the family is just as equally awful.  For all the inaccuracies found in the costumes used in the movie Gone With the Wind there is a charm and elegance in Scarlet's clothing that is missing in Point of Honor.

Now we move onto the plot line.  Point of Honor follows the Rhodes family who at the start of the Civil War are wealthy slave owners.  But the family is also conflicted by their slave owning status and decide to free their slaves, with one of sons announcing this move at a military school to the applause of his peers.  An intriguing plot-line, as many Southern slave owners were conflicted by slavery and in a few pockets in the South there were Southern abolitionists who freed their slaves.  The drama of the show seems to center on the reaction to the decision to free the slaves with the family--one daughter wails that by freeing their slaves the family will "lose their point of honor."  Her concern seems the be validated as the ladies of the family have to ward off a band of angry white neighbors with only a shotgun and their plunging bodices.  The Rhodes family is now fighting a war on the battlefield, with their neighbors, and with themselves as members of the family pick up arms for the Union and the Confederacy. The acting appears to border on the melodramatic, and scenes shown in the pilot border on the ridiculous.  My particular favorite (for all the wrong reasons), is when one of the Rhodes daughter's (in plunging neckline) announces that one of the female slaves has been sold.  The poor girl starts to plead with her mistress to not sell her, when her fellow slave grabs her and slaps her while her mistress looks on in horror.  Really?  Historically this scene should be the other way around with the white mistress slapping her slave for her inappropriate behavior.  I had hoped that since 12 Years a Slave won such critical acclaim film makers would be more comfortable showing the brutality of slavery.

Sadly, Point of Honor is not the series that I had hoped it would be.  You can view the trailer by clicking on the video above.
Posted by Michelle Hamilton at 4:13 PM