Last week, I had the pleasure of having a book signing at the Lincoln Home National Historic Site as part of Abraham Lincoln's birthday celebration.  It was a thrill to be invited back to the Lincoln Home.  As part of the birthday festivities the NPS held a lecture series followed by the book signing.  It was a lovely event, though a little chill.  Over night Springfield had been hit by an unexpected snow shower.  The chilly weather did not deter the public and I loved meeting and talking with fellow Lincoln buffs. 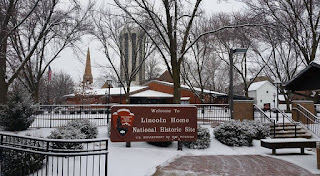 The city was coated in a fresh coating of snow after an unexpected snow shower. 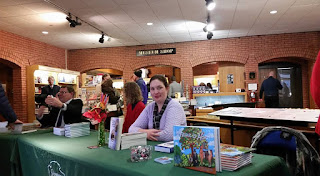 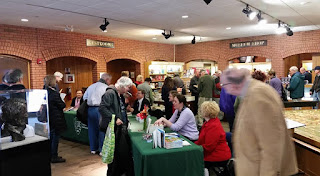 The Visitor Center was filled following the lecture.  The chilly weather did not keep visitors away. 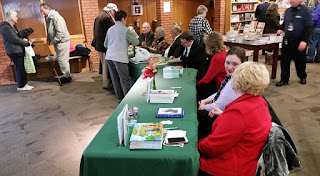 Talking to Carla Mayernick, author of Where is Abe? a children's book that she wrote to introduce her grandchild to Abraham Lincoln after discovering that there was not a book for three-year-old's about Lincoln.  To learn more about this charming book visit Where is Abe?

Bonnie Paull and Richard E. Hart where on hand to sign copies of their fantastic book Lincoln's Springfield Neighborhood.  Available on Amazon--a must read for those interested in the personal life of Abraham Lincoln before the Civil War.  Paull and Hart researched reveals that the Lincolns where generally loved by their neighbors and the family was known for their charity and entertainments.

It was a pleasure to meet the renowned Lincoln scholar, Wayne C. Temple who signed my copy of Lincoln's Surgeons at His Assassination which can also be purchased on Amazon.

After the book signing I went over to the Abraham Lincoln Presidential Library and Museum to see my friend Pam Brown who brings Mary Lincoln to life.  Along with visiting with Pam, I visited the Taper Gallery at the Museum featuring the gems of the institutions collection.  On display, where Mary Lincoln's personal family china that she ordered after the 1864 election for the second term.  It was very understated compared to the china ordered for the first term.  The buff coloring appears peach under certain light unlike the bold solferino that Mary Lincoln picked for the first term.  Also on display was Mary Lincoln's music box that she purchased after her husband's death.  Following Abraham Lincoln's assassination, Mary never entered a theater again.

Sadly, my trip to Springfield was brief, but I enjoyed celebrating Abraham Lincoln's 207th birthday in the city that he loved. 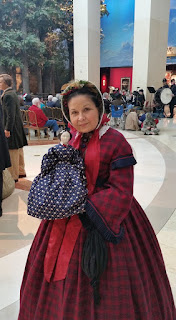 Posted by Michelle Hamilton at 6:21 PM No comments: