Last weekend I had the pleasure to be part of an historic event in Richmond commemorating the 150th anniversary of the Fall of Richmond and Emancipation.  Part of what made the event special was that we were actually re enacting the events hour by hour on the actual days in which they took place.  Even the weather was cooperating and was eerily similar to the weather 150 years ago.  As part of the commemoration the National Park Service designed a Civil War flash mob with  Civil War re enactors gathered at historically significant locations.  For the weekend I played a southern Unionist based on Elizabeth Van Lew.  It was a fun role to play, but at times not easy as at times it was intense dealing with the hostility of the pro-Confederate characters.  I am a person who does not usually like confrontation and at times after engaging in an intense "argument" with the other re enactors I would find myself shaking like a leaf.  I admire the bravery of Elizabeth Van Lew and the Richmond Unionists for following the dictates of their conscience in a less than welcoming atmosphere. 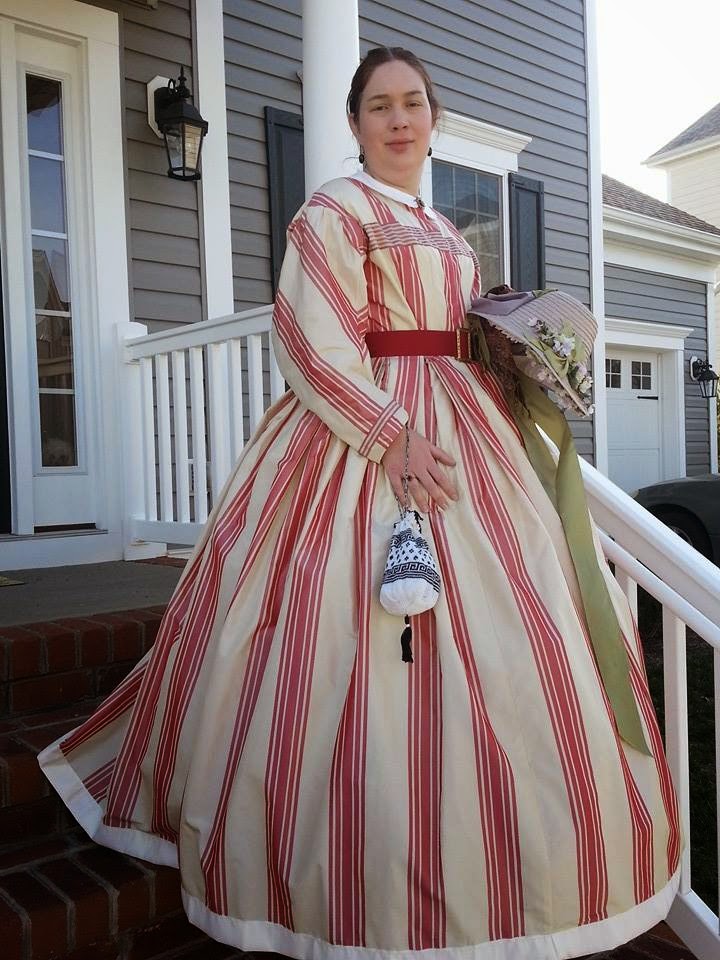 I was so thrilled to be wearing a new dress for the event.  Since Elizabeth Van Lew came from a wealthy family, I decided to wear a silk taffeta dress, also I wanted to look my best for the arrival of the Union Army.  (Photograph courtesy of  Lynn Hamilton)

For the first day I was placed in Capitol Square in front of the Virginia State Capitol, a gorgeous location.  It was no longer 2015, but April 2, 1865, and Confederate President Jefferson Davis had just received a note from General Robert E. Lee while sitting in his pew at St. Paul's Episcopal Church that the Army of Northern Virginia could no longer hold onto Petersburg, VA and that the army was now in retreat leaving Richmond vulnerable.  Realizing that the Confederacy could no longer hold onto the Confederate capital, Davis and the Confederate government evacuated the city.  I was accompanied with Rebecca Turner who played an Irish factory worker and Marc Ramsey who played an Confederate officer.  Capitol Square is a gorgeous location with lovely gardens, a beautiful water fountain, and the historic Virginia Washington Monument.  I would address visitors passing by, informing them that I was very excited that the Confederate government was evacuating, how I hated the Confederacy and slavery, and how I helped operate a spy ring in Richmond.  The response from the public was amazing, many were excited to engage in a first person conversation and would talk with me for several minutes.  I expected a few people to be pro-Confederate and against "my" position and activities.  Surprisingly, practically everyone I encountered at this site voiced their approval and admiration.  Comments about how "brave I was" and a few "God bless you" where the typically response.  I was even interviewed by the Richmond Times-Dispatch, though for the interview I did break out of character for the moment. 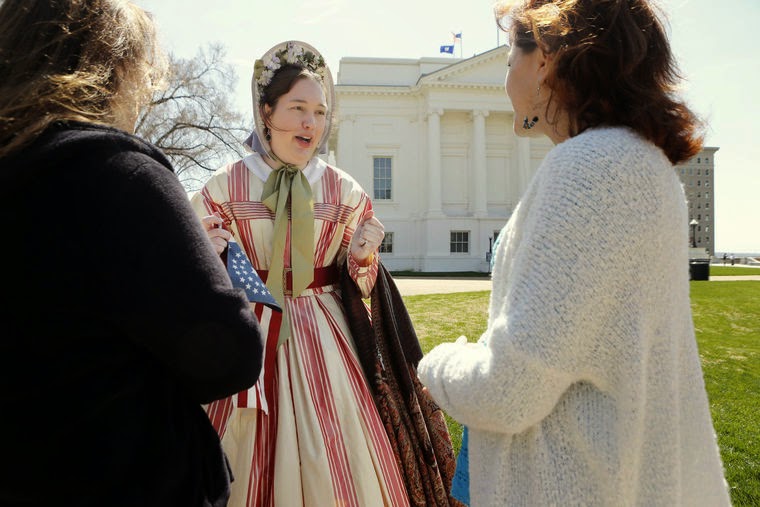 Talking to the public with the Virginia State Capitol in the background.  (Photograph taken by James H. Wallace courtesy of the Richmond Times-Dispatch)

To see more images taken by the Richmond Times-Dispatch visit 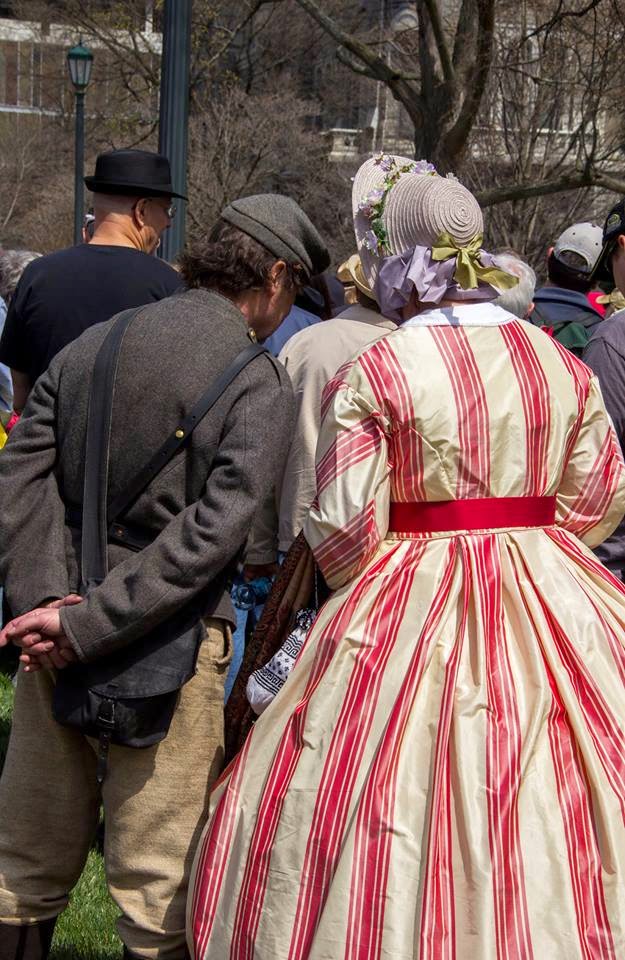 Trying to over hear any news about the evacuation of Richmond, but the crowd of spectators was to large.  (Photo courtesy of Richmond National Battlefield Park)

In the evening I participated in illumination tour conducted by the National Park Service.  On the evening of April 2, 1865, evacuating Confederate military officials set fire to munitions, tobacco, and anything else that could supply the Union Army.  Unfortunately, strong winds coming from the James River quickly spread the fire into the commercial district burning nearly 800 buildings and 20 blocks.  With the Confederate government fleeing the city, social order quickly broke and looting occurred.  To commemorate these dramatic events the National Park Service held a special tour with re enactors stationed at important locations connected to the fire and looting.  I was placed in Capitol Square with with Ann Andrus (a poor refugee), Cheryl Dale-Hodges (nurse), Laurel Scott, Debbie Phillips, and Adrienne Robertson (elite women).  The night was beautiful with a stunning, gibbous moon.  As it got darker, projectors illuminated the State Court of Appeals building with flames.  Being a Unionist, I did not find any sympathy with the assembled ladies and I have to admit I got more fire and brimstone as the night went along.  I loudly declared that while I hated the war, I hated slavery more and that I regarding the burning of Richmond as God's purification of the sins of slavery.  From the crowd I occasionally received a hiss or a loud cheer.  We had a special guest during the night as Virginia Governor Terry McAuliffe and his family took the tour. 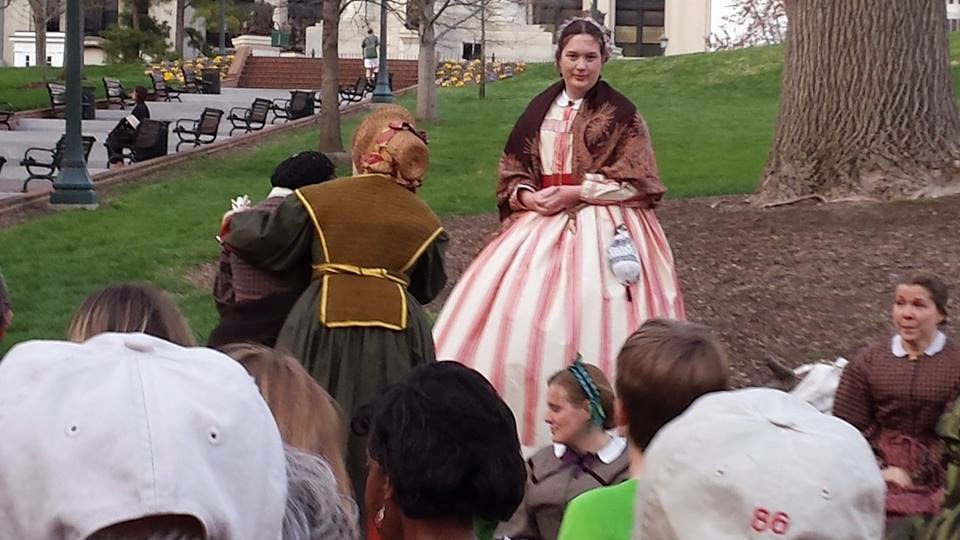 As a Unionist I am not mourning the end of the Confederacy in Richmond.  (Photo courtesy of Michael Hamilton) 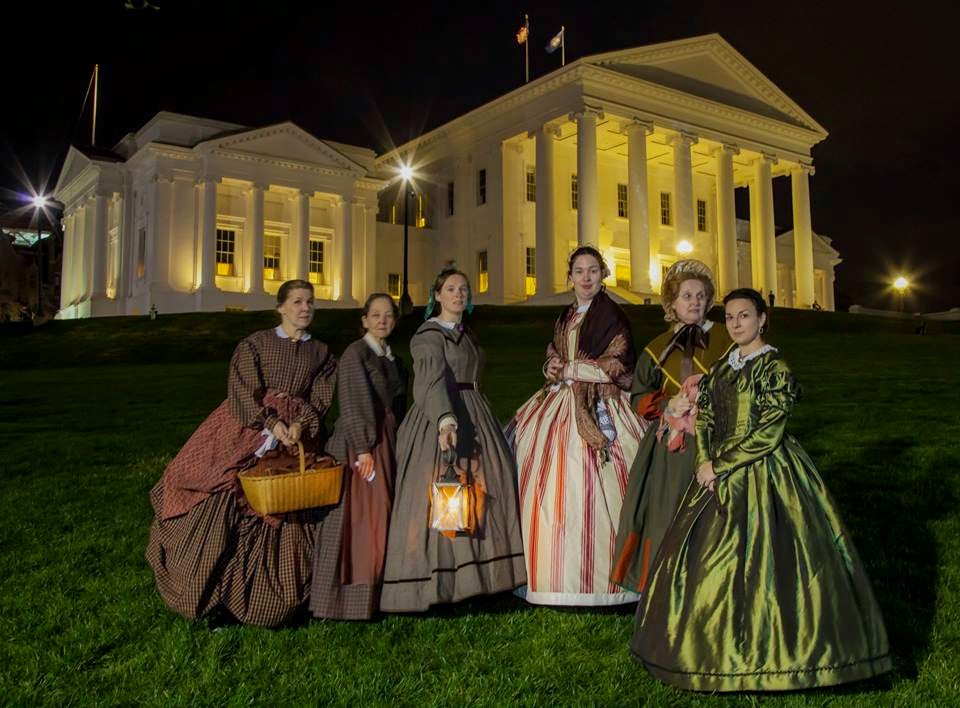 The ladies of the illumination tour.  (Photo courtesy of Richmond National Battlefield Park) 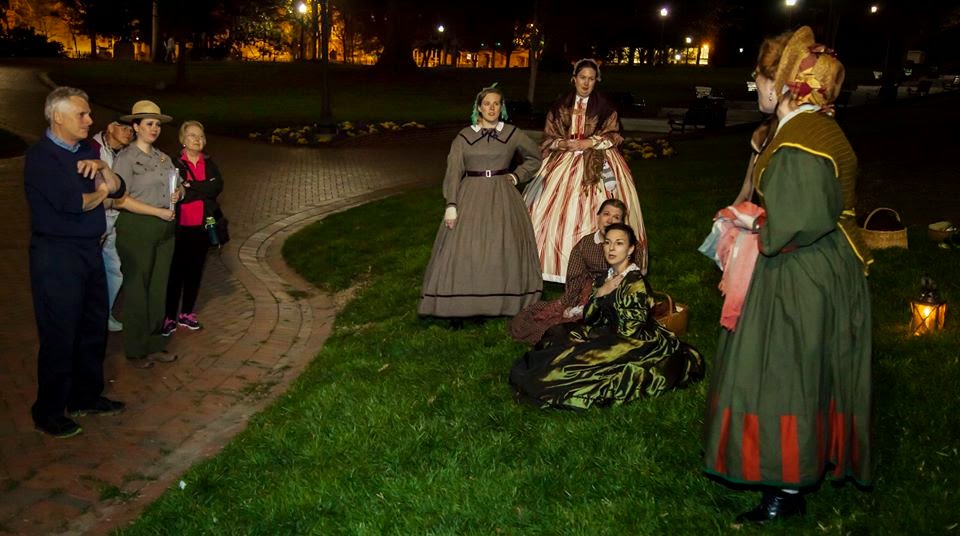 The next day commemorated the arrival of Union forces in Richmond on April 3, 1865.  Symbolically one of the first units to enter the former Confederate capitol were members of the United States Colored Troops.  Upon the Union's arrival in Richmond, Union authorities started to bring law and order back to city with Union troops helping to put out the fires, stopped the looting, and offering rations to starving civilians.  As a Unionist, I welcomed the Union troops stationed to guard the White House of the Confederacy.  The crowds where a little thin due to it being Good Friday, but one of my dreams has always been to re enact at the White House of the Confederacy.  I even had a curious experience.  While standing by the front steps I began to smell pipe/cigar smoke.  I quickly looked around, as I was in a no smoking zone--but there was no one around smoking.  It remained me of the scents I used to smell at the Whaley House.  Who knows, perhaps I was smelling the phantom scents of a Confederate official or a Union officer. 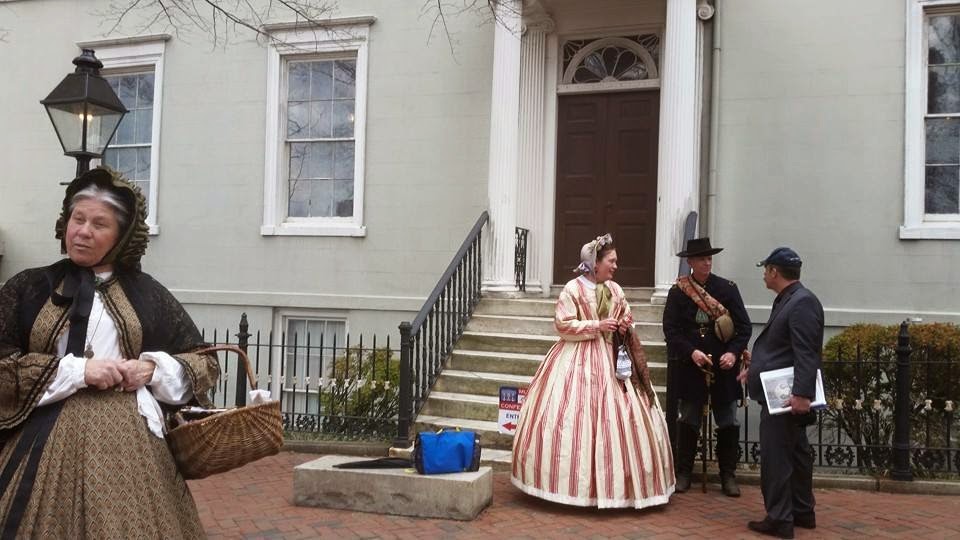 Outside of the White House of the Confederacy with Bonnie Johnson.  I am talking with Robert Gilbert direct descendant of Constance Cary for more about Constance read my earlier post  (Photo courtesy of Hillary Turner) 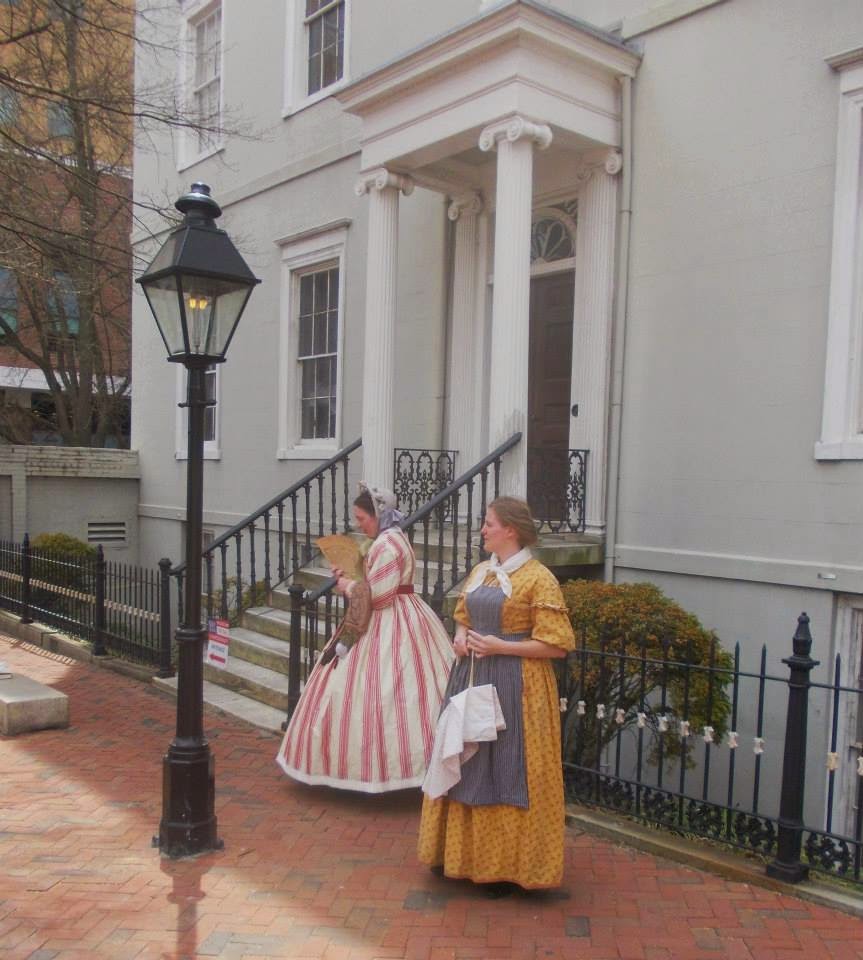 Another image outside the White House of the Confederacy with Adrienne Roberston.  (Photo courtesy of Charles LeCount)

On Saturday, the last day of the commemoration I returned to the Capitol Square where a procession of USCT's commemorated the arrival of Union troops on April 3, 1865.  Naturally, as a Unionist I was overjoyed to see Union soldiers marching down the streets of Richmond and brought flowers to give to the soldiers.  Following the procession, there was a ceremony on the steps of the capitol commemorating the 150th anniversary of Emancipation in Richmond.  The event concluded with an afternoon of living history, speakers, and historic displays. 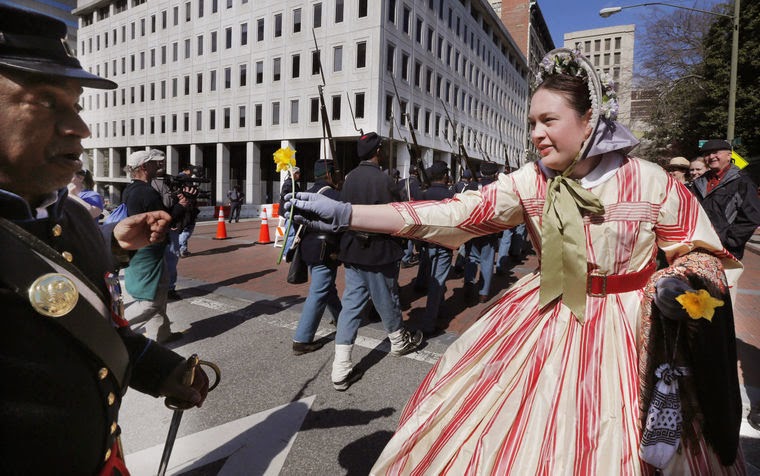 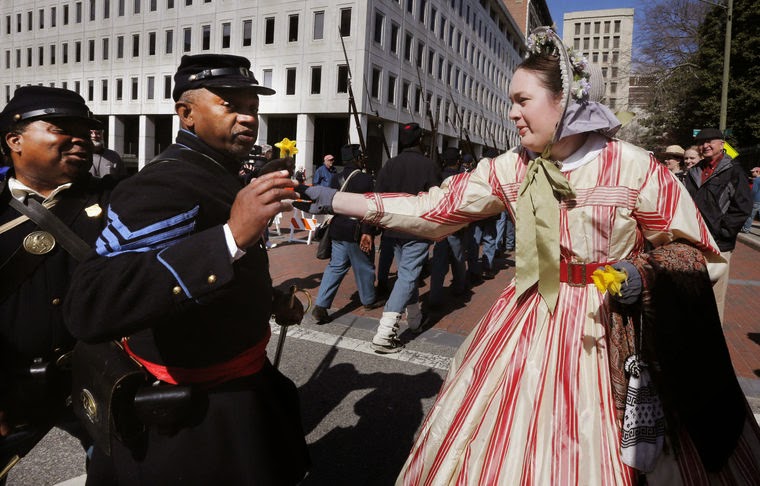 This was a once and a lifetime event and it was such an honor to participate. 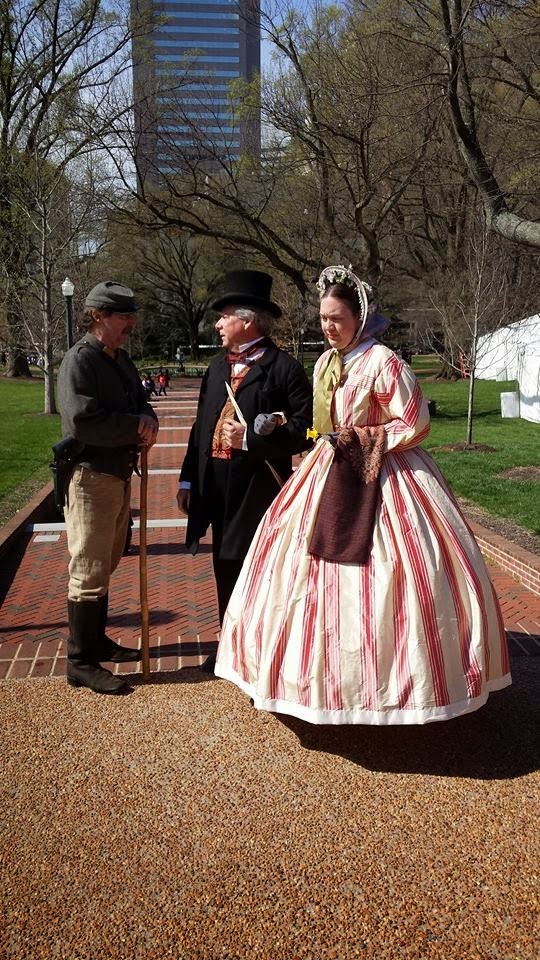 Of course, how can you turn up the chance to pose on the steps of the Virginia State Capitol?  (Photo courtesy of Adrienne Robertson) 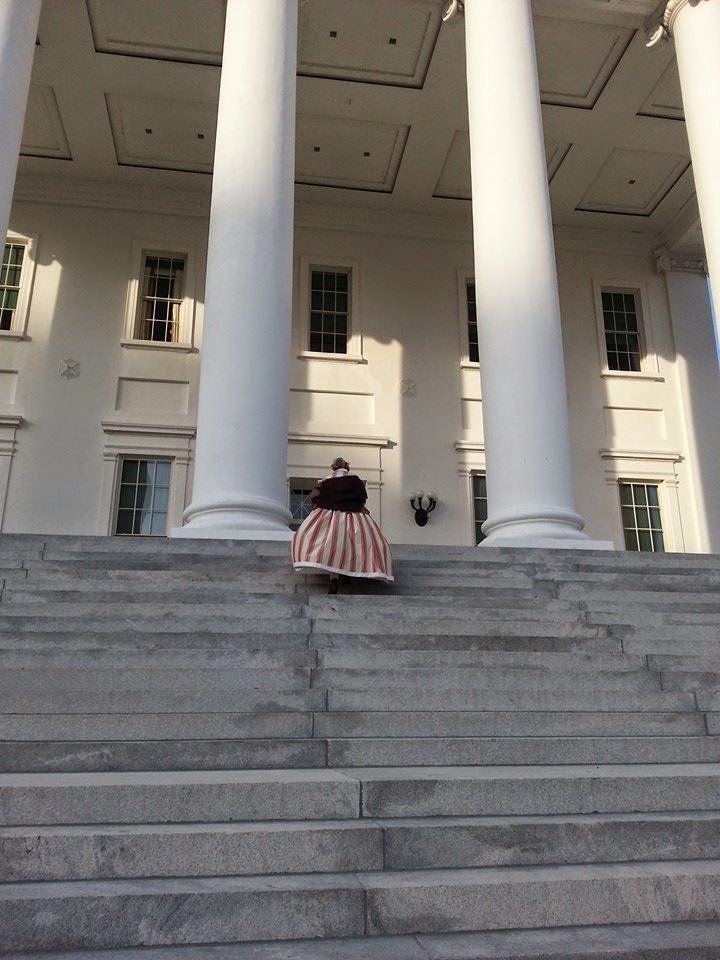 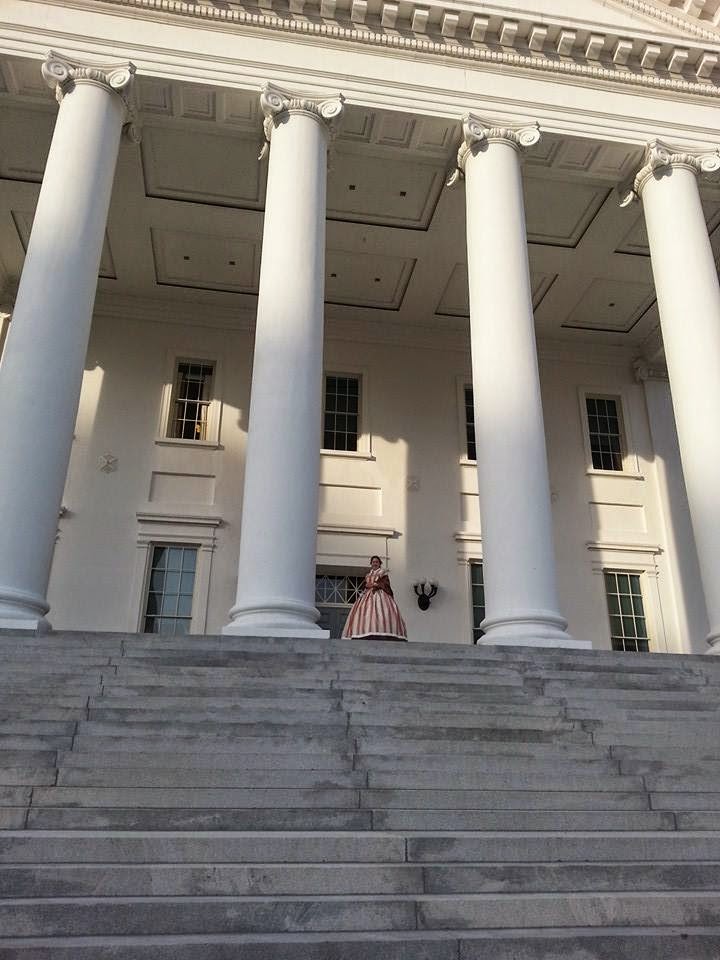 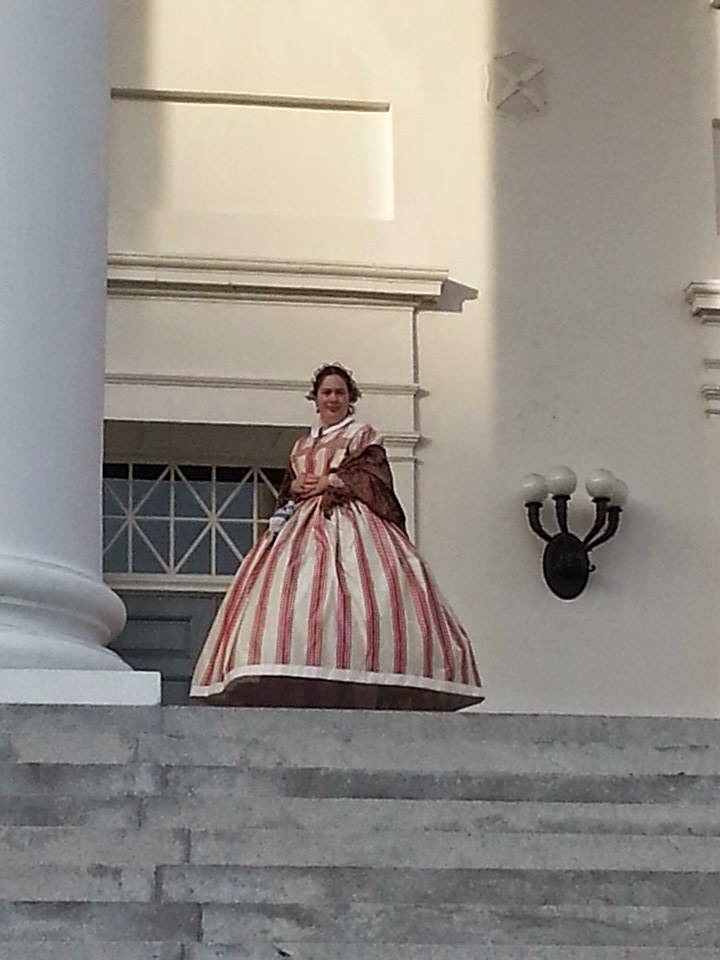