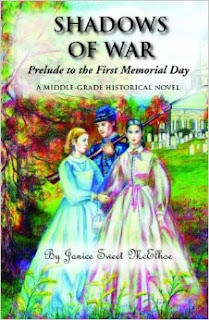 Shadows of War: Prelude to the First Memorial Day by Janice Sweet McEllen tells the true story of the origins of Memorial Day at the end of the Civil War.  In August 1862, best friends Sophie Keller and Emma Hunter are looking forward to their first day at school in the small town of Boalsburg, Pennsylvania.  Little could they imagine that by the end of the day their lives would be changed forever.  The girls arrive at school to find that their teacher has been moved by President Lincoln's call for more volunteers and intends to form a company.  Sophie is shocked when her older brother announces that he plans to enlist to fight for the Union.  With a mixture of pride and sadness, Sophie sees her brother and classmates march off to war.  Now left behind, the women of Boalsburg tend to their farms and support the war effort by forming a Soldiers Aid Society.  Though spared from the dangers of the battlefield, the war is still brought to home to Sophie through the letters sent to her from her brother.  As the causalities on the battlefield mount, Sophie is forced to confront the realities of war.  In the midst of grief, Sophie and Emma plant the seeds that would evolve into Memorial Day.

A charming story of family, friendship, and community.  The story stands out for its accurate portrayal of village life in the North during the Civil War.  Largely spared from the clash of armies, Northern civilians were still exposed to the hardships of war through the absence of their young men.  For the lucky families, their solider came back at the end of the conflict.  Those left behind on the home front where surrounded by the grief experienced by the families of those whose solider would not be coming back home.  These themes are touchingly presented in Shadows of War.  Highly recommend for middle-grade to adult readers.

To order Shadows of War visit Amazon
Posted by Michelle Hamilton at 6:41 PM