I Met a Ghost at Gettysburg

In the spring of 2015, journalist Don Allison and his grandson went to Gettysburg to explore the areas Civil War history.  As part of their vacation, Allison went on a private ghost tour of Sachs Bridge.  Near the end of the investigation, Allison had an experience that confirmed for him that ghosts are a reality.  Don Allison's ghost adventures are charted in his memoir I Met a Ghost at Gettysburg: A Journey Into the Paranormal.  Allison is a respected journalist who has received numerous awards for his reporting for The Bryan Times in Bryan, Ohio.  A self-proclaimed skeptic, Allison never believed in the paranormal.  That all began to change after Allison and his wife, Diane, purchased an historic house in on Highway 127 in Bryan, Ohio.  The house dated to 1835 and had been allowed to deteriorate.  Allison and Diane brought the house back to its former glory.  But during the restoration process, it quickly became apparent that they were not the only resident in the house.  Allison became aware of the history's haunted reputation when a former tenant stopped by and told them of his experiences from ghostly footsteps to the sighting of alien beings.  Naturally, Allison scoffed at the reports, joking with his wife that the stories explained why there were so many empty beer bottles found on the property.  But soon Allison began to experience things that he could not explain.

Convinced that the house was haunted, Allison gradual came to terms with his houses non-paying tenants.  Seeking clarity into the paranormal, Allison contacted famed Gettysburg ghost research Mark Nesbitt.  The information that Nesbitt provided gave Allison peace of mind that he was not alone or going crazy.  While in Gettysburg in a trip in 2009, Allison began experiencing paranormal activity.  Fascinated with the Civil War, Allison decided to take his grandson, Connor, on a Gettysburg vacation in March 2015.  The intention of the trip was to explore the Civil War history of Gettysburg, but in the process they got more than they expected.  From ghostly footsteps in the hotel room to the sounds of a Civil War era cannon blast, Allison realized that this was going to be a memorable vacation.  The paranormal investigation on Sachs Bridge connected Allison to the paranormal in unimaginable ways for Allison.  Speaking through a spirit box, Allison became convinced that he was speaking with the spirit of an Ohioan captain that died at Gettysburg.  The events at Gettysburg convinced Allison that he needed to share his paranormal journey with the public, the result is this book.

An entertaining memoir of one man's paranormal adventures.  Allison writes as the average man, someone who never actively pursued the paranormal until he unexpectedly encountered it.  A refreshing paranormal memoir, as the haunting that Allison experienced was benign and friendly in nature.  A recommended read for those fascinated by the paranormal and the ghosts of Gettysburg. 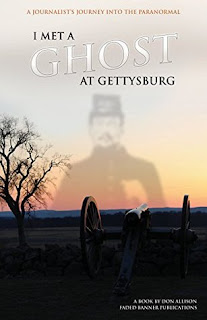 Posted by Michelle Hamilton at 8:12 AM